When he left AR, Villchur went back to working as a researcher. He chose the field of hearing aids, since he felt that there was considerable room for improvement in these devices. He pointed out to an interviewer that when you see a person with eyeglasses, you assume that whatever vision problem they might have is fully corrected by their glasses. But when you see a person with a hearing aid, you assume that the person still has hearing difficulties. He set out to change that, and spent several years investigating the problem in his home laboratory in Woodstock, NY.

By 1973, he had come up with a revolutionary concept in hearing aid design—the idea of using multi-channel compression to make up for the variable loss of loudness. Each patient’s audiogram, combined with individual testing, would determine the correct program for that person. It was multi-channel so that those with hearing losses in specific frequency ranges could receive amplification where needed. More importantly, he used “wide dynamic range compression” (WDRC). Unlike the previous “compression limiting” circuits, which limited loud sounds to a certain level but did nothing to increase the gain for quiet sounds, Villchur’s WDRC amplifiers increased gain for softer sounds without excessively amplifying louder sounds. 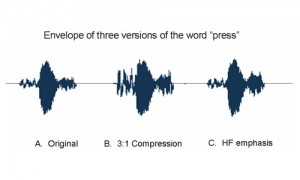 Rather than apply for a patent, he decided to publish his findings and make them available to anyone who wanted to use them. Fred Waldhauer of Bell Labs heard Villchur lecture on this new hearing aid system and started a Bell Labs project to develop a hearing aid. Bell Labs did not continue with the project, but Waldhauer went on to work for ReSound and bought the rights from them for the work that had been done to that point. ReSound manufactured a programmable hearing aid based on Villchur’s principles. Over the next twenty-five years, Villchur’s innovations became the industry standard for hearing aid design. It is nearly impossible to find a hearing aid today – digital or analog – that does not use multi-channel wide dynamic range compression.

Edgar Villchur has written three books and over one hundred and fifty articles on high fidelity, sound reproduction, audio engineering, and hearing aid technology in both peer-reviewed scientific journals and popular magazines, including two articles written when he was ninety years old. At the 1995 meeting of the Acoustical Society of America he received the Life Achievement Award from the American Auditory Society.